Comhaltas Ceoltoiri Eireann (pronounced “kol-tus kyol-tori air-in” and translates to “a gathering of Irish musicians”) is an international organization based in Dublin, Ireland. Started in 1951, Comhaltas is a non-profit cultural organization and exists for the purpose of preserving and promoting traditional Irish arts, specifically music, singing, dance, and language, and to co-operate with all bodies working for the restoration of Irish culture. There are approximately 400 branches worldwide. 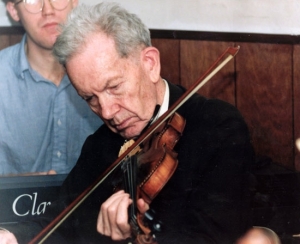 Our local branch, the Martin Wynne Branch, was founded in 1995, and is dedicated to the renowned violinist from Ireland who also found himself at home here in Western New York. Martin Wynne was an outstanding musician, teacher, and composer. He was also a mentor for many to live and learn from.

Born in Buninadden Co Sligo some 79 years ago, Martin grew up in an area steeped in traditional music.  He took up the fiddle at an early age, and throughout his life he has been a man of shy and retiring nature and so like the proverbial prophet he neither sought nor achieved fame in his own area.  In the forties like many other young Irishmen, he boarded the emigrant ship for England and settled in London.  At that time, dances were held six nights a week and Monday was the exception.

The Banba Club in Kilburn and the Blarney Club Tottenham Court Road held dances on Saturday afternoons as well as Sunday nights.  Martin joined the Johnny Muldoon outfit and for some years was a familiar figure in the band that played in the Garryowen Club in Hammersmith as well as the Shannon Club in Kilburn.  He remembers that most members of the band were English born and played from sheet music.  Two long serving Comhaltas stalwarts still active on the London scene Dick Landers and Edmond Murphy remember the band and mention that another member of the band was the late and great West Limerick flute player Paddy Taylor.

In 1948 Marting set sail for New York and has resided here ever since.  Those were the halcyon days of traditional music in New York.  He would loved to have met the great Michael Coleman but as he says in his own witty manner Coleman cheated on me by three years twice.  He left his native Killavil three years before I was born and went to heaven three years before I arrived in New York.  Jimmy Morrison was also gone to his eternal reward.  In the years following his arrival in New York, Martin bought the 78’s of Morrison and Coleman.  He played them over and over endeavoring to analyze their styles and intricacies of their playing.  Paddy Killoran was still going strong and his club on Saturday night was a big attraction for the exiles who came to hear him and his Irish Minstels and to watch and dance the Clare sets.

Coleman, Morrison, and Killoran figure prominently among Martin’s favorite fiddle players.  However,  he rates the late Jim Lad O Beirne as one of the all time greats.  Martin went to work for Con Edison and here he met another recent arrival from the old sod – the late Tyrone born Jim Conway.  Down the years Martin has offered valuable technical advice to many young aspiring fiddlers.  One yong man who deeply appreciated and benefited from such advice was Brian Conway, son of Jim’s.  Brian speaks in glowing terms of Martin’s advice on bowing techniques as well as his exhortations not to speed the music.  Martin has also high praise for New York fiddler Andy McGann.  He also mentions another Sligo musician, Tom Gannon, who composed a number of tunes.  He also met the great prolific composer, the late Ed Reavy from Cavan and is loud in praise of his compositions.

Unfortunately, Martin never made a commercial recording.  However, together with Lad O Beirne, they made a few non-commercial discs that are real gems.  He also recorded a few such discus with fellow Sligo man Vince Harrison.  Apart from his playing, Martin is a great veritable mine on the origin and setting of tunes.  He can quote Cole’s Book, White’s Book or O’Neill’s book and can tell you that the last bar of Father Tom’s Wager as played today is not as it was written, nor as it was recorded by the Cawly, Cashin Trio in Chicago many years ago.  He will also let you know that, a reel commonly known as Andy McGann’s was, in fact dressed by Lad O Beirne.  Lad also composed or dressed a reel known as the Geese in the Bog.

To the young musicians of today the name of Martin Wynne is linked to three popular reels known as Martin Wynne’s No 1, No 2, No 3.  What is remarkable about these three tunes is the fact that they form part of a series of five or six tunes composed by Martin back in the thirties when he lived in Buninadden Co Slio.  Since then, he has not composed even one tune, however one of his reels was sent to Dublin by the late Willie Coleman and it subsequently appeared in one of Brendan Breathnach’s publications.  In recent years he was loath to play a solo but loved to play in a session and frequently participated in Comhaltas sessions around the New York area.  He enjoyed playing and would have no part in group playing of such variable tunes as Bonny Kate and Jenny’s Chickens.  When asked to play other familiar tunes he would refrain saying that they were not prepared and packaged.

Martin Wynne personifies a once great tradition that in the relative recent past sputtered for awhile, but is now enjoying a new lease of life.  The 1989 Fleadh Cheoil na hEireann was a milestone in the life of this renowned fiddler and composer.  Not alone was this the first time that Ireland’s premiere cultural event that held in his native Sligo but the organizing committee set a welcome precedent by unanimously electing Martin to the prestigious position of Uachtaran na Fleidhe.  Martin Wynne is the last remaining link with the great fiddle players from Sligo, who at home and abroad have set standards that all aspiring young fiddlers try to emulate.